Food in community engagement: if food be the tool of the Gods, then engage on!

Food in community engagement: if food be the tool of the Gods, then engage on!

If food be the tool of the Gods, then engage on! Ok ok so the title of the blog is a bastardised Shakespearean quote and in its literal sense totally lost but hey artistic licence ok!

The growing importance of food and drink in community engagement

What I’m trying to get at and what I have noticed recently is how food (and drink) is becoming more and more a recognised and important in community engagement not just as a draw card but a major tool for enhancing opportunities and getting people to congregate and chat. Those that eat together, speak together and those that speak together, collaborate.

Now those that know me know I have a love for using tea as an analogy for Community Engagement. The process of making and the ingredients needed. My philosophy – never under estimate the power of a good cup of tea, or as Gran always said ‘a cup of tea solves everything’, is more eloquently put by a philosopher from the 20th Century

“There is no trouble so great or grave that cannot be much diminished by a nice cup of tea”  Bernard-Paul Heroux.

This philosophy has been with me for 5 or 6 years now after a stint in shaping the changing face of adult care in local government followed by neighbourhood action planning in social housing I recognised that the most important tools I had when getting residents and tenants together to talk and collaborate was a hot water urn, ingredients for tea and a good selection of biscuits. Developed watching people arrive in a meeting room above a chilly city library in North London on a wet winter evening I realised the focus was not the agenda or the information set out neatly on tables but around the table where they could make a cuppa, chat and share without boundaries.

This is something I now mention in my introduction to community engagement training, 3 or 4 slides (shout if you want a copy), to help the staff I’m working with get an easier understanding of what makes up community engagement and why I work hard to try and make it part of the organisations culture and routine… just like your morning cuppa. That tea urn and ingredients for a good cuppa are also now permanently fixed to the top of a planning list when engaging the community face to face.

Thanks to Joanna Hubbard my philosophy is expertly written up here as a post on her blog.

So that’s my own personal example of how food/drink is important in the process of community engagement. But as I mentioned before just recently I have seen other examples and some pretty darn good ones. So without further ado more examples of food based community engagementness.

1) Food as an incentive

A top favourite for those who engage youth, food is often used as an incentive to participation. Using free pizza is an easy way to get people in a room and talking about certain topics. I mean think about it. Your 17 (again) and somebody says ‘hey, want some free pizza, just come and chat about your views on how the council is running recreation centres?’. What inevitably registers is the words ‘free pizza’ but the idea is that for a little bit of time, some of your views on something you use/are interested in and at a time when you’re not busy practicing with your mates in your garage band the cheap yet appealing incentive gets people sat around together and chatting.

Here’s a great example of how the Youth Affairs Council of South Australia (YACSA) use pizza to encourage youth to come along and discuss politics… Pizza and Politics, simple. YACSA, by putting people in the same room as some of the top decision-makers for a Q&A session over pizza offer youth a chance to ask burning questions and be listened to.

Of course it doesn’t have to be pizza, this is very much a food incentive driven engagement aimed at youth. Think doughnuts, cake, chocolate or if promoting a healthy agenda – fruit platters. What you choose could also define the venue you use to meet in as the places that sell these incentives can often also be places people feel comfortable in. Personally I have engaged a parents of children with Autism group in a pub over a pint, neighbourhood residents in a library with cakes and cookies and even a group of resident’s carrying our mystery shopping assignments on the housing association in a local IKEA café because the cinnamon scroll and coffee combo is a winner.

2) Food as a catalyst

Bowling alone… or bowling and cake! In the late 1990s Prof. Robert Putnam observed and wrote about the decline of social capital in America in an essay which then became his book ‘Bowling Alone’. The book focused on the decline and revival of community in the American context and if you haven’t read it please do as it a pretty easy and enjoyable text.

The guys at Creating Communities in Western Australia obviously took the title of the book to heart when they decided to start the ‘Barefoot Bowling Together’ competition in 2011.

But what they also did was add an element of food to enhance the opportunity for increasing social capital and engagement in their community, in this case they added cake, as they saw the benefits food engagement literally brought to the table. What they found was by playing bowls and eating cake together it created stronger bonds for the community and even helped new relationships to develop. The opportunity to share in a sport and eating experience together also broke down cultural barriers helping newer community members to integrate.

I have seen this sharing of food work well in London where when consulting with residents of 4 culturally different housing associations on the renewal and redevelopment of a shared run down play space and garden a number of neighbours, feeling empowered, themselves provided food during a number of onsite consultation days as a catalyst to conversation and bringing people out of the houses. This sharing of cultural food and eventually recipes led to a new neighbourly understanding and a joint agreement on developments for the shared space. Food was one of the main catalyst for these new relationships and agreements to happen.

3) Food as an icebreaker

Often used at many a party to get things going, these party games can also be seen a great icebreakers in community engagement.

The example I found is known as the M+M game and easily adapted from party pleaser to engagement tool and though I have not used it myself, I love Chocolate so will be keeping this one in my arsenal of participation tools.

In the M+M game you basically hand round a bowl of M+Ms and get people to take a few. In turn each person then picks one sweet and depending on the colour answers a corresponding question you have prepared for that particular colour. Questions such as tell us…, why…, what… etc will help break down the barriers of a meeting, especially if people are not familiar with each other, before you start. The bonus is that everyone then gets a little treat after answering their questions.

4) Food as a builder

The best way to a man’s heart is through his stomach and Roman armies marched on their stomachs plus we all know Rome wasn’t built in a day so I’m guessing there was a lot of marching and food… Whether its building a relationship or a community, food is very much a builder.

Here are a few examples where food has very much been used as the builder in the community.

Firstly Jon Bon Jovi’s soul kitchen where amazing meals are produced for the community, by the community and with, where possible, community ingredients. The menu has no prices and people who eat there have to sit with people they may never have met before and pay what they can. If you volunteer locally you may also get presented with meal vouchers. The idea is to build community and neighbourliness. I love it!

Second up is FutureGov’s Casserole Club in the UK. The Casserole club helps people share extra portions of home cooked food with others in their area who are not always able to cook for themselves and in turn what often happens is that new social connections are made and friendships built. In the social context those who are vulnerable feel less lonely, part of the community and eat well. Rumours are that soon we will see a Casserole Club in Victoria.

The third tasty offering is PieLab whose equation is simply pie + conversation = social change. They are basically advocating and driving conversations and collaboration out of a pie shop where you can drop by and eat pie with people who want to listen and ask questions about the community to enact positive change. People get to meet new people, build new friendships and develop the community all because of pie.

Last but not least (as there are loads of other examples) is Todmorden, where the whole village is one big edible community landscape. Watch this TED.com video to find out how a group of empowered community members with the right get up and go attitude managed to turn a few community verges and planters around the town in to an edible landscape that helped change the whole narrative of foodfor the whole community.

Following on from Pam Warhursts story of Todmordens edible landscape the final example of foods influence in community engagement is its ability to empower. 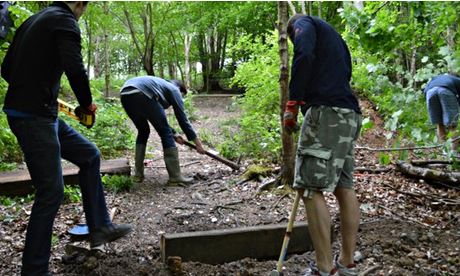 Now this is something I actually have personal experience of as the street I live on has its own Guerrilla garden on which we have successfully grown pumpkins, tomatoes, citrus fruits, herbs and what seems like millions of chilies of varying varieties. Before the residents took on the piece of land it was used as a dumping ground for old cars and rubbish but now sports 10 fruit trees, a water standpipe, numerous veg and flower patches and some interpretive experimental sculpture by a local artist.

As an example here is an article from the UK on how the movement is taking shape and this video from TED.com is by a guerrilla gardener in South Central LA.

An excellent TED talk by Ron Finley about how growing your own is like printing money and by starting guerrilla gardens you also start to battle the health issues of fast food chains with your own fresh foods.

For a few more examples, check out my growing Pinterest collection of guerrilla community projects – of course in sharing these I am not condoning or encouraging you to do anything illegal.

So as we can see food and engagement go very much hand in hand or should I say hand and mouth! Not only can food be used to incentivise people’s participation in the community it can help as the catalyst to social change, break down barriers, build relationships and also provide empowerment to those communities who desire it the most.

Put the kettle on!

Do you have any examples of where food has played a massive part in your community engagement projects? It would be great to hear from you. Now go put the kettle on, don’t forget to ask those around you if they want one and grab a chocolate biscuit, all this food talk must have made you hungry.

5 ways to use Periscope/Meerkat for community engagement

About the Author: Andrew Coulson

Andrew Coulson is an experienced community engagement professional. He is currently Team Leader for Community Engagement projects at the South Australian Government Department of Environment, Water and Natural Resources.